Until 1820 Maine was a district of Massachusetts, and its early symbols were based on that connection. The pine tree emblem that had been adopted for the Massachusetts naval flag in April 1776 was prominently featured in the coat of arms of Maine when it became a state. Pine trees were important to the early economy of the area because of their use in the shipbuilding industry. 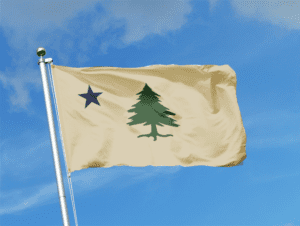 Maine’s original state flag was finally and officially adopted in 1901, as the pine tree and a blue north star on a cream colored background. The flag was likely created by marine committees who were interested in a state flag that would be recognizable from a distance at sea. The original design was appealing as it had large, distinct features as it did not include any words, making it readable from either direction.

It was a simple yet unique design, one that was distinctive and recognizable. However, it only represented the state for 8 years before becoming obsolete. Now, Maine’s State Museum doesn’t even have a copy.

Maine’s original state flag fell by the wayside largely due to the fact that by 1909, a new – and much more generic looking – Maine state flag had been adopted. Civil War veterans in the legislature wanted the Maine flag to resemble the battle flags from the war, and they wanted the flag to be primarily blue, to represent the Union and contrast the red of the Confederacy.

Featuring the state coat of arms on a navy blue background, Maine’s new flag can easily be confused with other similar state flags. Still, this design has been Maine’s official state flag for the past century.

While there’s no indication that this will change anytime soon, Maine’s original state flag is starting to make a comeback. 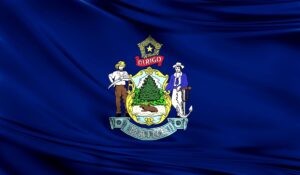 The current state flag was established in February 1909. Its coat of arms shows a moose-and-pine-tree emblem on a shield supported by a farmer and a sailor; a ribbon below bears the state name, and above is the North Star and the Latin motto “Dirigo” (“I direct”). Maine also has a special naval flag resembling that of Massachusetts; it features a white background with a green pine tree.

NEXT
Flag History of New Hampshire