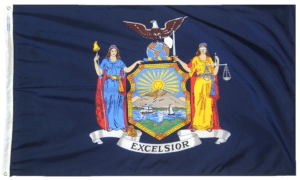 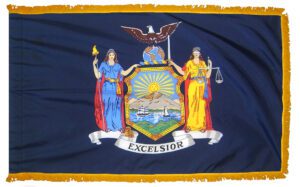 The Flag of New York:

The official state flag of New York was adopted in 1901. Emblazoned on a dark blue field is the state coat of arms, which was officially adopted by New York in 1778. The flag’s design features the goddess Liberty holding a pole with a Liberty Cap on top. Liberty stands for freedom. At her feet is a discarded crown, representing freedom from England at the end of the revolutionary war.

On the right of the flag is the goddess, Justice. She wears a blindfold and carries the scales of justice. Meaning that everyone receives equal treatment under the law. The New York state motto “Excelsior” on a white ribbon on the bottom of the flag expresses the idea of reaching upward to higher goals. On the shield a sun rises over the Hudson highlands and ships sail the Hudson river. Above the shield is an eagle resting on a globe representing the Western Hemisphere.