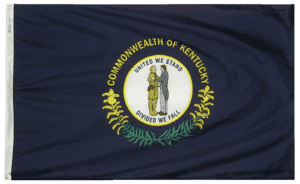 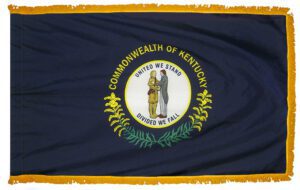 The Flag of Kentucky:

Flag official Adoption Date: March 26, 1918
The state flag of Kentucky was designed in 1918 by Jesse Cox Burgess. The design was officially adopted on March 26, 1918.

The flag shows the State’s (Commonwealth’s) seal on navy blue, surrounded by the words “Commonwealth of Kentucky” above, and Sprays of goldenrod extend in a half-circle around the picture which is Kentucky’s state flower.

The seal depicts a pioneer and a statesman embracing. Popular belief claims that the buckskin-clad man on the left is Daniel Boone, who was largely responsible for the exploration of Kentucky but it is said that the men represent all the people, rather than any specific person. They are said to be acting out the meaning of Kentucky’s motto: “United We Stand; Divided We Fall”.

“I pledge allegiance to the Kentucky flag, and to the Sovereign State for which it stands, one Commonwealth, blessed with diversity, natural wealth, beauty, and grace from on High.”